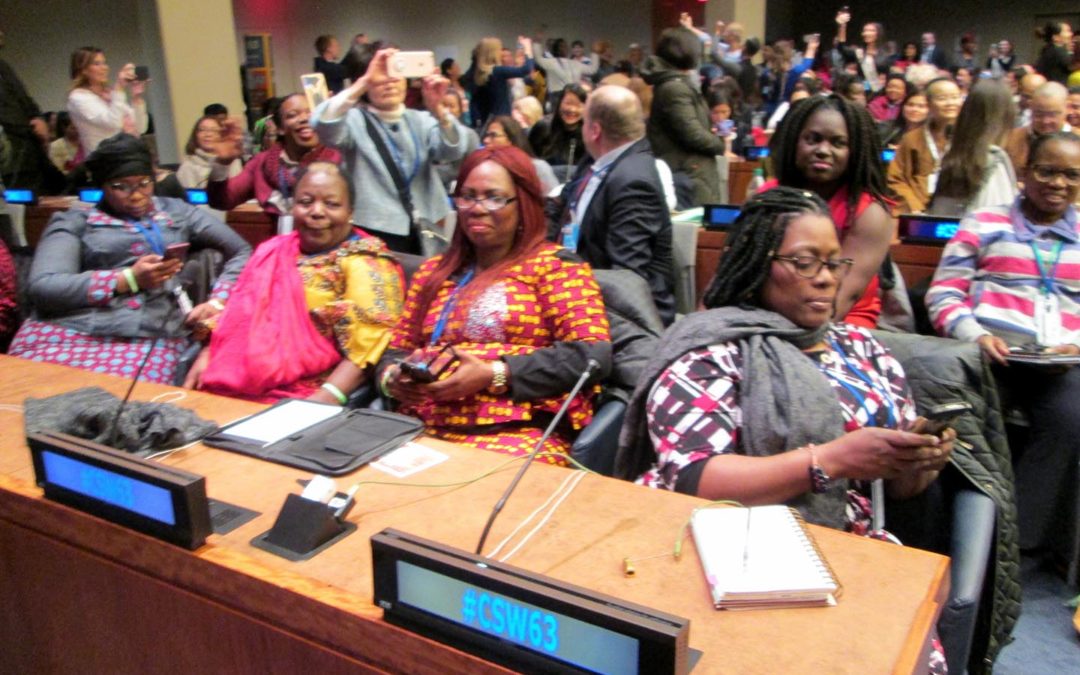 A roomful of delegates waiting for the Secretary General who was very late.

Lucina Kathmann, board member of Chicago Network, represents PEN International, an NGO with consultative status at the United Nations, at the 63rd meeting of the Commission on the Status of Women.

This is the day the Secretary General speaks to us. Another opportunity to stand in line for various hours. I did it though. I stood in line from 10:50 to 12 to get tickets to the Town Hall room itself. (There is also an overflow room. Those in line after the first 500 must make do with a video version of this Town Hall event.)

Like all his predecessors, the Secretary General António Guterres is a man. I am chronically unhappy about this. The UN badly needs a woman Secretary General. However I am quite interested in his message. According to SG Guterres, in these times of pushback, we must push back against the pushback. He cited three internal UN matters and two external ones. 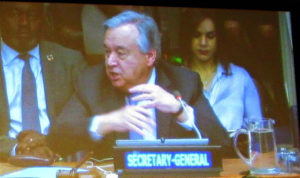 When the question and answer session began, almost immediately someone brought up the issue of visas for delegates. This produced an energetic round of applause. Everyone is unhappy because so many delegates and invited guests could not come to the CSW because they were denied a visa to enter the United States.

Last year my report discussed the very bad situation with respect to visas for delegates. This year the  situation is even worse; more visas than ever have been denied. Frustrated women detailed their personal experience at every panel, everywhere they could get a microphone. They named the country and the women whose visas were denied. There were many countries and many women. These women had their paperwork, they had everything in order. In some cases the interviewer even congratulated a woman on her answers and even so, denied her the visa. 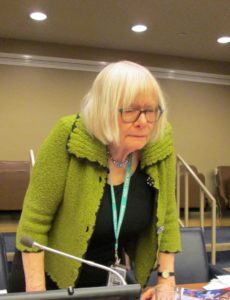 In the intervening year some lawyers have investigated this problem. It absolutely should not happen. There is a treaty:

No. 147 UNITED NATIONS and UNITED STATES OF AMERICA Agreement regarding the Headquarters of the United Nations, signed at Lake Success, on 26 June 1947, and approved by the General Assembly of the United Nations, on 31 October 1947, with an Exchange of Notes, dated 21 November 1947, bringing this Agreement into effect. Article IV Section 11 reads: 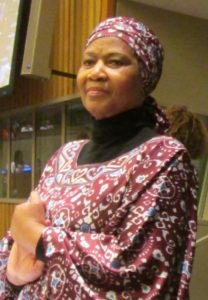 This treaty was a precondition for the UN being located in New York. In the past it has occasionally been violated, and the legal grounds that have been cited in the exception related to a perceived threat to US national security. Some of those cases have been pursued by the courts.

Yet obviously in the past two years it has been violated many times, and the exception is not the reason for denying these visas. Nobody claims that a woman invited to discuss farming in Ethiopia is a threat to national security. When the delegates or guests or their organizations have inquired why the visas were denied, in some cases they receive no answer. However in some cases the immigration agents have cited these reasons 1) the women were not legally married 2) they did not have children 3) they did not own property and 4) they did not have evidence of stable work to which they must return. The agent suspected they might overstay their visa.

Nobody from the US government has brought up a case of a woman who testified at the CSW overstaying her visa. The NGO association that organizes events during the CSW, CSW/NGO, says it has not heard of a single such case.

Opinions vary on what to do about this. These are suggestions I have heard.

United Nations Commission on the Status of Women 63
– Session Review –