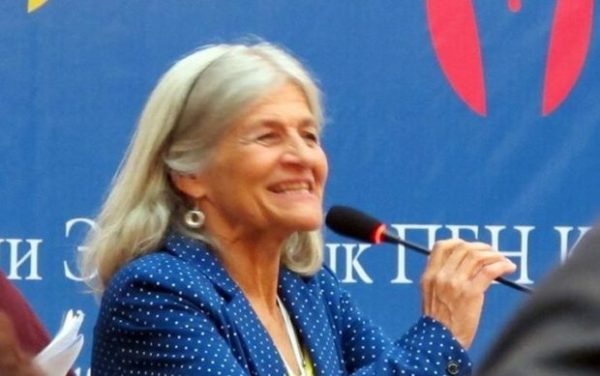 CSW 63, the 63rd session of the United Nations Commission on the Status of Women, opened today. During these two weeks official delegates from 45 countries will take up the priority theme, “Social protection systems, access to public services and sustainable infrastructure for gender equality and the empowerment of women and girls.”

At the same time thousands of representatives of non-governmental organizations will attend the official sessions as well as a plethora of side events and panels. Some side events take place in the UN buildings but the non-governmental events have expanded so that now they occupy spaces in another half dozen or more venues. During prime time there can be a dozen events happening at once.

The UN is mostly a club of governments. It is rare that there are many NGO reps on the premises. But during March, the CSW meets. It encourages input from civil society. Thousands of women suddenly appear. They come from every continent, wearing every sort of garment, speaking every language. The UN’s premises have never been adequate to hold them. Yet the number of women increases every year and the UN premises loses the battle worse every year.

We start out waiting in endless lines for endless hours hoping for our badge, which is the sine qua non for getting into the UN building. This morning was nothing special. I have done this long wait more than 20 times in the over 20 years I have attended. There are always very many new faces but also many of us in the line are used to it. We know that we have very little chance to participate and won´t be able to do much for the condition of women the world around. But we might! There is a tiny chance that, by banding together, we might generate better language in some document, more attention to special needs we know about, something. That gets us there before dawn and keeps us coming and bringing our friends year after year.

This morning a woman was distributing a flyer farther down the line. I thought “I have copies of the newsletter of the PEN Women Writers Committee. I can hand them out, at least as far as I can reach.” (I can’t leave my place in line of course.) So I handed out some copies.

This had surprising results. There was an Algerian man down the line from me who had been complaining that he really could not function in English; he much preferred French. His presence was not surprising. Among the thousands of women standing in line the first Monday of the meetings, there is always a small percentage of men. They typically work in women’s issues so their organization has sent them to the CSW. I gave him a copy of the newsletter saying “This bulletin will be fine for you, the whole text is here in French.” He took it, and soon, to my total astonishment, took out a pen and started underlining in it. He commented to me that he thought it was fascinating.

But that wasn’t all. Soon an indigenous woman from Guatemala shouted greetings to me from down the line. She had recognized me. I sent a newsletter to her too, this one opened to the Spanish pages. She started reading in a report about how much trouble the delegates had had attending last year because of US immigration. She shouted down the line, “That’s right. They wouldn’t let me in, they wouldn’t let any of us in, it was terrible!”

It was unexpectedly nice weather today, too. Not a half bad start!

Lucina Kathmann, board member of Chicago Network, represents PEN International, an NGO with consultative status at the United Nations, at the 63rd meeting of the Commission on the Status of Women.