The silencing of writers: Saudi Arabia 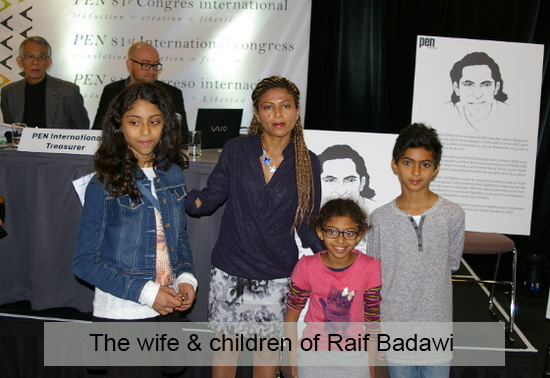 On the Rue Saint-Jean in the Place d’ Youville just inside the Gate to the Old City of Quebec, a young woman stands in silence with three young children at her side.

On the Rue Saint-Jean in the Place d’ Youville just inside the Gate to the Old City of Quebec, a young woman stands in silence with three young children at her side.A large photo of a man stands next to them. BADAWI is printed on the left side at the bottom of the portrait; on the right side is printed the logo of PEN International. The young woman—her name is Ensaf Haidar—is the mother of the three children: two girls and one boy, ranging in age from 8 to 11 years old.

Ensaf is the wife of Raif Badawi, the man in the large photo. These are his children. Though their French is limited—they are in exile in Quebec—the family stands patiently in the early morning mist of a balmy October day in the hope of making the world aware of Raif Badawi—the husband, the father, the writer—imprisoned in Saudi Arabia for planning a conference on human rights.

Badawi was arrested in 2012, convicted in 2013 with a sentence of seven years in prison and 600 lashes. In 2014 Badawi’s sentence was increased to 10 years in prison and 1,000 lashes. In January 2015, the first 50 lashes were inflicted upon him with disastrous effects on his health. The lashings are currently on hold.The main original charge against Badawi was “insulting Islam through electronic channels.” This charge has been upgraded to the charge of “apostasy” which means that Raif could be sentenced to death—probably a moot issue since he is unlikely to survive a 10-year sentence or the lashings.

Later this same October morning, Ensaf and the children appeared before the assembly of PEN delegates at the 81st PEN Congress in Quebec. This time there would be an empty chair to mark the absence of Raif Badawi from his rightful place as a speaker at this conference in which I was a participant. Ensaf addressed us in Arabic. Her plea for her husband’s release was translated into English, French and Spanish.

The European Union awarded Raif Badawi the 2015 Sakharov Prize for defense of freedom of thought and human rights.

This past December Raif went on hunger strike and was moved to a high-security prison. His lawyer Waleed Abu Al-Khair, who was planning an appeal for Raif, has been sentenced to 15 years in prison ( and a 15-year travel ban after serving those 15 years ) for forming the organization ‘Monitor of Human Rights in Saudi Arabia.’

To beg King Salman for a pardon seems the only way out of jail for Raif Badawi.

Women, Shia and other minority forms of Islam, Christians and other non-Muslims, writers, non-conformists, homosexuals, guest workers ( there are more than 9 million ), internet users, artists—all are special subjects for the scrutiny of the religious police who work hand in hand with the various Saudi security services to maintain social and moral order and the ruling family’s political control.

The religious police of Saudi Arabia—the Committee for the Promotion of Virtue and the Prevention of Vice ( CPVPV )—function as a semi-autonomous agency that reports directly to the king. The CPVPV enforces a code of conduct governing all behavior. Their members do not wear uniforms. They enforce their idea of Sunni fundamentalism as they see fit.

According to Amnesty International, in 2015 Saudi Arabia executed more than 150 persons, mostly by beheading. Some by crucifixion. Too many by legally flawed processes. Too many with the excuse that they were security threats to the state or that they insulted Islam.

This past September Saudi Arabia was appointed to head the five-nation panel that advises the United Nations Human Rights Council.Go figure.