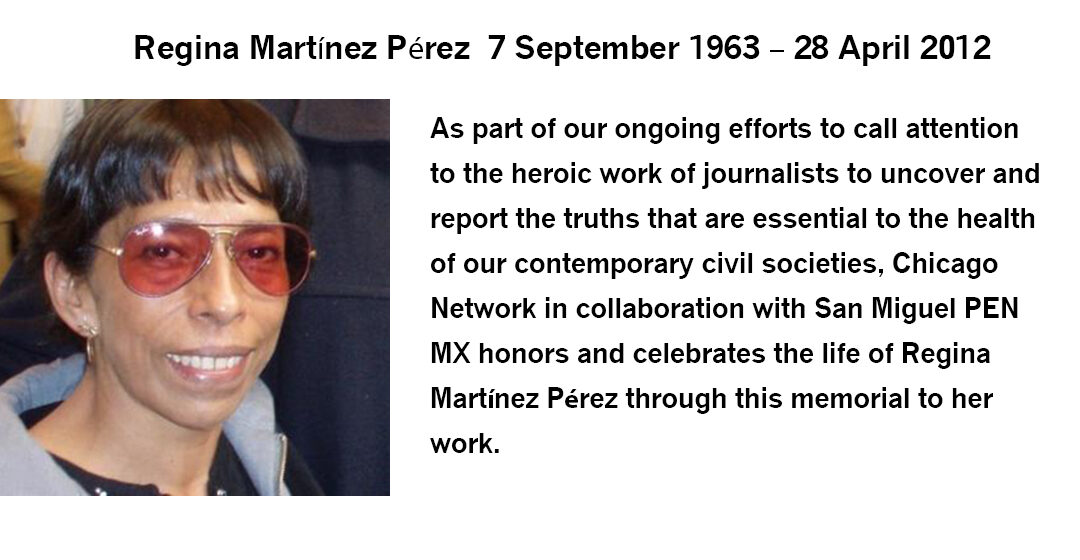 A daughter of Veracruz, Mexico, Regina Martínez Pérez’s decades-long investigative journalism career focused on her native state. From 2000 until she was found beaten and strangled to death in her home on 28 April 2012, she worked as a leading correspondent for Proceso, a national investigative weekly media outlet. According to Proceso director Jorge Carrasco, “Everything the local press didn’t dare to publish, was published via Regina Martínez.”

Affectionately called “La Chaparrita” by friends because of her 4’ 11” stature, she was reviled by corrupt authorities for reporting on ties between government officials, drug cartels, police and regional prosecutors. Often, she criticized governors Fidel Herrera and Javier Duarte for allowing Veracruz to become dominated by cartels. She knew her life was in danger in the leadup to publishing her investigations of the disappearance of thousands of people throughout the state, writing of living “in a climate of terror” in her last year of life. The local investigation of her murder was a fabricated cover up; a suspect widely believed innocent was arrested and found guilty.

In 2020, Forbidden Stories, a consortium of journalists, launched an investigation of Martínez’s murder as part one of “The Cartel Project,” a collaboration between 60 journalists and 25 media outlets world-wide that continues the work of their murdered colleagues in Mexico. Martínez’s brutal murder, after many in past decades, was a tipping point leading to the development of concrete strategies to counter impunity for crimes against the press throughout Mexico. Mexico remains the deadliest country in the Western Hemisphere for journalists and other writers investigating criminal activities.